Day 11 of the 24 beer of Christmas is It Came Upon A Midnight Meme, an Cascadian Dark Ale, from Triptych Brewing in Savoy, Illinois. When I initially saw the can I was hoping that this was a stout, maybe an imperial stout. It was dark and had the word “midnight” in the title, my wishes had to come true. Alas, a Cascadian Dark Ale with spruce tips and Strata hops, this could be good, especially if the Dark Ale is well balanced.

Jack pot! It Came Upon A Midnight Meme has a huge amount of pine that is balanced by coffee and, to lesser degrees, chocolate and roast. The pine rides throughout the drink but doesn’t kill your palate and doesn’t linger. This beer is really well done. Also, I have to give it to Tripych with the naming of the beer along with the use of spruce tips for a beer destined to be in a Illinois Christmas pack. Based on that overall concept, this is my favorite beer so far. I hope they only keep getting better. I would have this beer again. Enjoy! 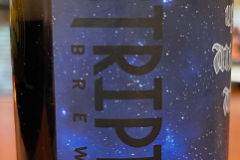 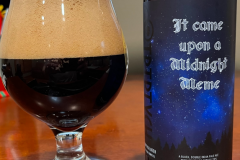 Useless Fact: Venus is the only planet that rotates clockwise.