Day 4 of the 24 beer of Christmas is No F&cking Lactose, an American India Pale Ale, from Werk Force Brewing Company in Plainfield, Illinois. Always excited to a hopped up, non-spiced beer in the box, and throw in the fact that this beer has rye in it; anticipation builds. Another plus: Werk Force is a local brewery that I frequent as often as life allows. A lot going for this beer, let’s hope it lives up to expectation.

No F&cking Lactose looks great in the glass but the aroma doesn’t hit the bars that the can purposes. There isn’t a date on the can so I am wondering when this may have been fresh. The hop profile is grassy as opposed to citrus and fruit. Clean fermentation and a light rye bite make for an overall enjoyable beer just not the home run that I had hoped. Based on the beer in front of me, I wouldn’t have this beer again. Enjoy! 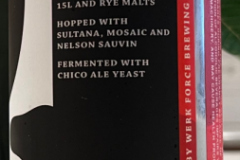 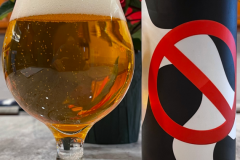 Useless Fact: In 10 minutes, a hurricane releases more energy than all the world’s nuclear weapons combined.