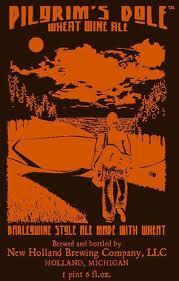 New Holland Brewing Company isn’t too terribly far away over in south-western Michigan. I tried to tour the brewery a little over a year ago but wasn’t successful, so we ended up at the New Holland restaurant instead. Darn tasty.

In spite of the close proximity to me, I seem to overlook the American craft beer goodness that is New Holland. I have rated five of their flavors and would have to say that outside of Dragon’s Milk, I have found their beers to be very average at best. When there is so much American craft beer to conquer, why settle?

Pilgrim’s Dole is made with about 50% wheat and the bottle calls it a wheatwine over a barleywine. It pours a copper hue with little, white foam and a spotty lacing. The nose and taste are very similar: caramel, sweet, and wheat. The beer is thick with little to no carbonation. A nice beer that I would have again and wished I had more than my sampling amount on the evening. Enjoy!

Useless Facts: Franklin D. Roosevelt was the first president to be televised, in ceremonies opening the New York World’s Fair in April 1939.