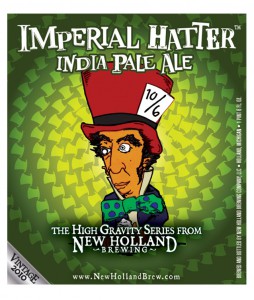 New Holland Brewing Company is one of the generous number of American craft breweries dotting the landscape in Michigan. The brew beer as well as distill. One of their newest items I have seen in the last year is a hoppy tequila.

I wasn’t after spirits with this one but their Imperial Hatter an American imperial IPA. Imperial Hatter has plenty of hops and hop bitterness to please any hop head. I guess my one complaint is the amount of unbalanced bitterness in the finish that lasts for a while. I have said it over and over again that I like some balance to my beers no matter how big or how outrageous they might become. A big beer the sake of being big and unruly is like the bully on the playground, except this bully take over your palate and taste buds with a vengeance, not giving them back for an hour or so.

Definitely worth trying, but be assured you won’t be tasting much thereafter. Enjoy!

Useless Fact: The English-language alphabet originally had only 24 letters. One missing letter was J, which was the last letter to be added to the alphabet. The other latecomer to the alphabet was U.