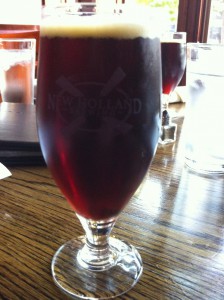 It is craft beer week in Chicago. To the uninitiated that means tons of great American craft beers will be on tap throughout the city at special events and tapping through next weekend. Unfortunately, I usually have to watch the event from the outside looking in as it is difficult for a guy with three young kids to go craft beer seeking on week nights, especially when I live a good hour or more from any of the events. Luckily for me the wife is really taking a liking to craft beer and she thought going to a tapping would be exciting.

When the first email came to me about noon in which she stated we need to go to something, I knew the game was on. Now it was just figuring out what worked best in our schedule. She quickly found that Mrs. Murphy & Sons Irish Bistro! was tapping Envious by New Holland Brewing Company. She offered to pick me up from work, with the kids, and head up to the North side for dinner and a beer. How could I refuse?

Envious is an interesting beer. It second fermentation on Michigan pears then placed on oak and raspberries. Quite the mix. As the beer warms, beers are always too cold from the tap, the nuisances of raspberry and oak begin to play on the nose and palate, with the raspberry strong enough to be the focus but subtle enough to let other characteristics come through. The one thing that distracted was a dry vegetal aroma that lasted throughout the drink. I would probably rate this in the mid to high seven range. Enjoy!

Useless Fact: Human eyes are so sensitive that on a clear night when there is no moon, a person sitting on a mountain peak can see a match struck 50 miles a way.