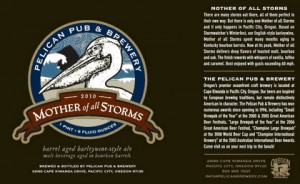 Tuesday Night Beer Club (TNBC) was held at Mark’s house this month. Since the climate in Chicagoland this time of year isn’t too inviting for evenings on the patio, we were stuck inside with a theme of Barleywine and Old Ale. Dinner, per the “club” rules, was provided by Mark; actually his wife. Some quality baked pasta and a salad. Good grub to start off the evening.

Typically we try and start the evening around 7pm or so but there is always that one person that seems to show up late and push back the night’s festivities. Yeah, it was Ed again 😉 Where’s my LOGO???? He was there by 740, we headed towards the basement, with Mark choosing the first beer.

The beer and ratings:

I will have to say that I was very impressed with the selection of beers, it gave me a new opinion and outlook on barleywines. They will no longer be the outcast of my cellar. Just remember that when having a beer with Ruby Wang, “All bad beers suck.” Enjoy!

Useless Fact: Your stomach needs to produce a new layer of mucus every two weeks or it would digest itself.