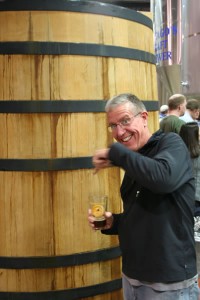 Rich excited that he has found an oak barrel in which to top off his beer!

Rich and I had chance to make a brewery hop yesterday and Two Brothers Brewing was the target.

Two Brothers is located in an industrial park in Warrenville, IL. This is a short distance away for the Two Beer Dudes to enjoy a pint and a tour.

The tour was crowded, so was the brew pub. free run 4.0 v3 The nicest twist of the tour: three free four ounce tasters of beer, your choice. Yes, free tour and free beer. Is there anything in life better?

They also have a sister company for distributing due to Illinois liquor laws which gives them the ability to serve up a whole lot of American craft brews in their pub that are not their own.

Two Brothers has some good beer and is one of the few places in Chicagoland that you can go on a brewery tour. Enjoy!