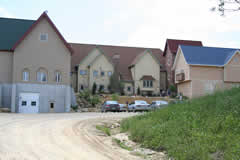 It wasn’t long ago that I would take a road trip out to New Glarus Brewing Company shortly after each of the Unplugged series releases. Last year they switched the series to Thumb print and I haven’t been out. Not because of that, because of life.

We have been busy. “We” in terms of the kids, wife, and myself. Yep, this is a family event. The wife likes the beer, the kids like to run around in the open brewery as well as the play in the water out front or throw snow balls at me when there is snow on the ground (yesterday). It is a 2.5 hour road trip (perfect length) that everyone appreciates.

A plan to go up to New Glarus has been 3 months in the making; always getting pushed back. The entire family woke up early on Sunday, so I mentioned a potential road trip to the wife. Her ears perked up and we were on our shortly after breakfast and showers.

I am always impressed with the cleanliness of the brewery. Almost all are clean but New Glarus is awesome. Building a brewery with the customer in mind, is top notch. As long as the tasting room/gift shop is open, anyone can take a self guided tour. Fortunately there weren’t many people there as the kids used the circular walkway as a race path. Burn off some energy.

The wife got the usual taster: $3.50 for three taster pours, including the glass to keep. I had had a couple pints of Moon Man: the first pint was $6.00 but included the curved glass ware, while the refill was $3.00. Really reasonable prices.

The staff continues to be knowledgeable, helpful, and super friendly. Two cases of Cherry Stout (re-released as part of the thumbprint series), a case of Spotted Cow, two four packs of Thumbprint Barleywine, and four bottles each Raspberry Tart and Wisconsin Belgian Red loaded up the mini van and it was time for lunch.

One quick note on lunch. We stopped off at a Swedish place in New Glarus that was recommended as the second best place to eat as the first was closed for the season. They had a buffet that was $5.00 for each of the kids. Upon hearing that price we didn’t bother to inquire the adult price. Bad move! We assumed $10.00 for adults, double the kids price. Try almost quadruple, weighing in at $19.50 per adult. The food didn’t sit well in my stomach afterwards. First and last time. Enjoy!

Useless Fact: It would take 27,000 spiders, each spinning a single web, to produce a pound of web.