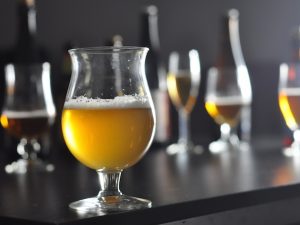 I have been home brewing up tasty (or not) beers for the past eight years. During a period from 2011 through early 2014, I spent a big part of my time researching, formulating, and brewing wild ales. I had the sour itch and I had it bad.

After buying duplicate plastic home brewing items to keep them form contamination, I decided it was time to take a chance on a Brett beer.

Throughout those early attempts, I used the usual suspects that could be obtained from Wyeast and/or White Labs: bruxellensis, claussenii, lambicus (my least favorite), trois (when it was considered Brett and not Sacch). As well as the different flemish blends.

Most of the Brett beers were takes on Belgian saison and pale ales and mashed in the high 140s. I tried using Sacch first, then adding Brett in secondary. I tried building up a Brett starter, pitching 100% Brett in primary. I even did a straight pitch of Brett without a starter, trying to stress the yeast in order to get more character out of the yeast. Most of my experiences were positive.

I was the first one in the home brew club that was even looking at Brett. I was the only customer at the home brew shop asking about the wild stuff. I was radical. I was cool. I didn’t know shit!

What was beyond Brett?

Shortly thereafter, I wanted more. I wanted more microbes. I wanted more sour. I needed more complexity. How to get it. After reading his blog, among other sources, and emailing many times with The Mad Fermentationist, I sought out some East Coast Yeast.

After many attempts to get the Bug Farm, one fine day I landed a vial. I was ready for my first lambic. It was actually the start of multiple purchases of East Coast Yeast, allowing me to try different styles and different techniques. Being on their mailing list had some advantages; for a while. I had now graduated to craft yeast and turbid mashes.

On Top of American Wild Ales?

I was proud of the fact that I had 10 or so carboys in one state or another of aging wild beer. I would go down and look at those carboys. I would boast to people that I had all these carboys making magic elixirs in the basement.

I imagined what these beers would taste like. They would be perfectly balanced. Blended well. Almost perfect.

I had added blueberries, raspberries, and blackberries to a blend of two years of lambic. I had two different Flanders browns, one Flanders red, plus other Brett combinations. It was a small piece of Belgium in my basement.

What Went Wrong with my Home Brewed Sours?

Life. My kids are growing up and all active in one level or another with basketball. We are a basketball family. My wife and I love the sport. We have tried to pass our passion down to our kids while relating basketball (and any sport) to real life. Connecting sport to life is important to me. Having the kids understand hard work, motivation, determination, and pushing through when the chips are down are lessons they will carry throughout life, giving them the tools to succeed.

The basketball affliction has taken it’s toll on the amount of time I have to devote to home brewing. Long weekends at AAU basketball tournaments only allow me to try new craft beers but not brew and not maintain, like I should, the beers faded away.

Via neglect, the sanitized water evaporated, allowing oxygen to permeate into the beers. I knew it was happening. I had lost interest. My focus was on family. The disillusion of Belgium in the basement eroded to the hope that maybe one beer would be okay, maybe.

Pouring out 3+ years of work in the form of 30+ gallons of colored vinegar wasn’t what I set out to do. Unfortunately, it is what I accomplished.

There are so many mixed emotions about the experience. I could ramble on but I will pull back here. Time to move on.

I have been a fan of hops since I started home brewing. I have stocked up some eight pounds of hops (that is a lot of five gallon batches, even when using 12 – 16 ounces at a time). I will stay the course, for now, with my hoppy beers. The last few have been successful: Baller IPA and The Train Man. The success of these recent home brews is welcomed in order to keep my imagination from roaming to a new past time.

I never cultured yeast from store bought examples of sour beers. I really don’t know why. Probably because thoughts of sanitation never crossed my mind while drinking a Russian River 375. If and when I go back into home brewing sour beers, I would like to try doing some culturing.

Now there are many new, small yeast companies producing yeast and bacteria blends (The Yeast Bay, Imperial Yeast, and Omega to name a few). Setting sail in the direction of sour beers shouldn’t be as difficult as it once was. Staying the course might be. Enjoy!

Useless Fact In eighteenth-century English gambling dens, there was an employee whose only job was to swallow the dice if there was a police raid.