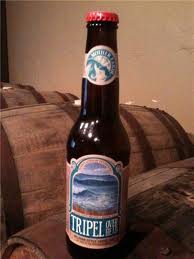 I was hoping that I would be reviewing American craft beer number 175 as a celebratory beer. Instead, it was to wash away my sorrows as the Miami Heat took at 3-to-1 lead in the best of seven series against my beloved Bulls. The Bulls just don’t have the offensive choices that the Heat do.

My wife and I were both coaches and when LeBron James had that charge (which was a charge, no doubt) with eight seconds left, I said if the Bulls put the ball in Rose’s hands one-on-one against James, Tom Thibodeau should have his coach of the year award stripped. Rose wasn’t going to score against LeBron in that situation, pick and roll, damnit!

When I went to the cellar looking for something last night, I couldn’t find one beer that was lighter than Tripel Overhead by Mother Earth Brewing. Tripel Overhead is a solid offering with an aroma and taste above average for the style. Maybe a bit too sticky would be my once negative on an otherwise quality beer. Enjoy!