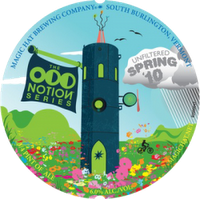 I don’t even know, based on the ownership, of Magic Hat Brewing Company if it is considered a craft brewery. After having had some of their beer in the past, I have sort of categorized them as a brewery that I would bypass. Magic Hat makes some okay beers but I would consider them more of a transitional brewery: meaning that someone who is looking to come into craft beer would like their beers more than an “aged” veteran.

I had Odd Notion Spring 2009 and it was far from something that I liked. When my wife showed up with Odd Notion Spring 2010 I was left than happy. That’s why the beer has sat in my fridge for a year. 2010 was much better than 2009, even a year old. I couldn’t find the beer on their site, so I don’t if they are continuing to brew the series. Enjoy!

Useless Fact: In Fruita, Colorado the town folk celebrate “Mike the Headless Chicken Day.” Seems that a farmer named L.A. Olsen cut off Mike’s head on September 10, 1945 in anticipation of a chicken dinner – and Mike lived for another 4 years without a head. Mike died from choking on a corn kernel.