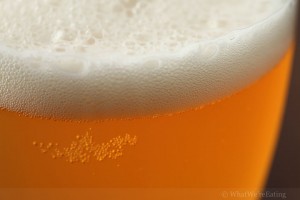 Tuesday Night Beer Club (TNBC) this month was over at Rich’s house. Yes, he has officially been included in the group after pledging for six months 😉 As per the rules of the evening Rich provided dinner: homemade sloppy joe, some sweet potato fries, and cole slaw. The sloppy joe, my second or third taste of his homemade concoction, is probably some of the best I have ever had. The only other rule of the evening is that Rich also gets to choose the theme of the evening, if so desired. He chose IPAs and any iterations that are somewhat close.

Imperial IPAs, dry hopped IPAs, harvest ales, Belgian IPAs, wet hopped IPAs, cellared IPAs, like I said any type of IPA that you could think of made its way over to Rich’s last night.

Apart from Ed having to tickle our fancies with gibberish from this past summer, we had one of the largest tastings we have had in quite some time: nine beers.

Each beer was good to a point with no duds among the selected. The peanuts, that Ed brought, were probably the best thing on the table in terms of cleaning the palate for the evening. Next up: December at my house. Enjoy!

TNBC Highlighted by California and Oregon!