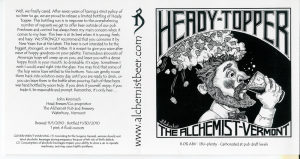 It has been a while that the Tuesday Night Beer Club (TNBC) crew has had a chance to get together. It was also nice to have Mark in from his east coast digs.

I didn’t have a bunch of time to hang out because of a promise to my kids to tuck them in as I have been working some long hours. I can never ignore requests like that as I know it won’t be long before my kids won’t want me to be at their bed side each evening. I have to appreciate each and every one of them.

I brought over a fresh can of Heady Topper (thank you Matt) by The Alchemist Pub & Brewery. Before my early exit, I coxed everyone into trying this fine American craft beer. It was a bit warm from being in my car all day in spite of being in Ed’s mini fridge for 15 minutes. The aroma of the pine and hop resin hit the nose and doesn’t apologize. Darn tasty with a hook of bitterness in the finish. Light body for an American Double IPA. Three more cans to go. Now that’s a good thing. Enjoy!

Useless Fact: Until 1893, lynching was legal in the United States. The first anti-lynching law was passed in Georgia, but it only made the violation punishable by four years in prison.