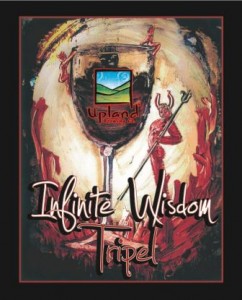 Upland Brewing Company has announced that they will be releasing Infinite Wisdom Tripel on Saturday, March 27th at Jake’s Nightclub in Bloomington, IN. The email I received didn’t say anything about bottled release but since they had artwork created, I have to believe they will be doing some type of bottled release besides.

Information from the email:

We’re celebrating the release of our Infinite Wisdom Tripel with the progressive bluegrass sounds of Cornmeal and the dynamic, esoteric art of Norton Wisdom at Jake’s Nightclub in Bloomington on Saturday, match supreme txt femmes March 27th. Doors open at 5:30pm, and music kicks off at 7 with Zion Crossroads, followed by Cornmeal at 9.

Wisdom is a good friend of the brewery and creator of the artwork on our Infinite Wisdom Tripel label – along with our Dantalion Dark Wild Ale and Double Dragonfly, yet to be released.

I have to figure out a way to get down there. I am hearing good things about their beers. Enjoy!