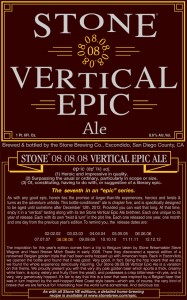 There have been rumors for quite sometime that Stone Brewing Company would be distributing its’ wears to good old Illinois. The release date was pushed back a few times but now it seems to be for certain and set in stone. In order to kick off the event, the Bavarian Lodge is throwing a launch party on Saturday, April 3rd, 2010 from 12:00 – 5:00 PM. match supreme prem The party will include a meet and greet with Greg Koch around 3:00 PM.

More from their newsletter:

We’re incredibly excited to help welcome Stone Brewing to Chicago. We’ll be hosting a special Stone Release Party with no less than EIGHT of Stone’s finest brews on tap, including a few from deep within the brewery’s cellars. The bash will culminate in a Meet & Greet with Stone Brewing Co. CEO and Co-Founder, Greg Koch! We’ll be opening early to celebrate the release of Stone’s fine line of beers in Chicagoland.

Now this is more like it. An awesome launch party in my own backyard. Enjoy!