A visit to Half Acre Beer Company was one of my easiest brewery hops to put together. Chicago, just about anywhere in the city, is a mere one hour from home. A tour set for 1:00pm puts us in the range of the kids falling asleep and/or playing DS the entire time that I will be on the tour. free run 4.0 v2 Of course the wife is along for the ride, I wouldn’t leave them in the car by themselves. 😉 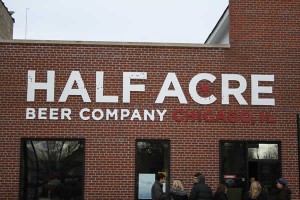 I am not going to go crazy here as you can read the entire story over in brewery hops, but Gabriel Magliaro, the owner, gave the tour so it was thorough. The brewery is actually two stories with their grain and barrel aging being done on the second floor. The tour started about 15 minutes late as people continued to pour (no pun intended) into the brewery past the 25 person limit, quickly passing 70. No worries beer was served and continually served throughout the entire time of the tour (about an hour). Gabriel even radioed for more beer to keep the crowd pleased. Now that is service for a free tour.

I talked home brewing with several others visitors and didn’t hear a ton on the tour. I plan on going again so I can hear about the history and capacity of Half Acre. Enjoy!