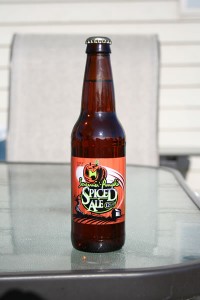 Screamin’ Pumpkin Spiced Ale by Michigan Brewing Company was the beer that I purchased before the party; proud of myself for even finding it, needless to say I was excited to try and review. I was not disappointed. Screamin’ brings back thoughts of my Mom’s pumpkin pie that I so dearly look forward to each Thanksgiving Day. Lots of nutmeg, all spice, and cinnamon spices that are not over powering but justified by the almost meaty body that seems to almost emit thoughts of pumpkin pulp. Having several of these might put you in an early Thanksgiving Day food coma, it is that good.

Boston Beer Company puts out good beers, in my opinion, that are more geared towards the masses that are thinking of trying American craft beer and/or actually believe they are enthusiasts. That said, Sam Adams doesn’t quite hit home runs for me but they do put out very drinkable, quality beers. roshe run flywire femmes Their Octoberfest is right on course. The beer was big on malt as should be expected, shooting the gambit of aromas and flavors that should be in present in an Oktoberfest beer. There was even a slight twinge of hops to offset the large amount of sweetness to the beer. I have this beer every year.

Two Beer Dudes (Rich and I) recently held our inaugural Oktoberfest party in which we had some 28 American craft beers show up for the event. Since I was the only one that was trying to review beers, I have decided to go through each beer and review on my own to be fair to the beer and the brewers. Two more beers should be up again tomorrow as I continue the trek across Oktoberfest land. Enjoy!