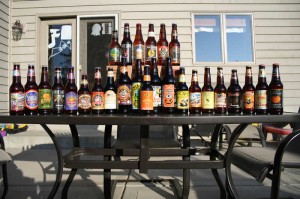 The Inaugural Oktoberfest Two Beer Dudes style has come and gone. It seems like when this event was in the planning stages that it would never arrive; it seemed on the morning of the event there was no one I would be ready on time; thank the heavens for the earliest person arriving a half hour late. 🙂

Rich and I had many discussions: email, phone, face-to-face, roshe run hyp about Oktoberfest and I would have to say that it went off without a hitch and everyone seemed to enjoy themselves (which is most important to me).

The food for the evening was authentic German fare: sausage from the German meat market, green cabbage sour kraut from German restaurant, home made: red cabbage sweet kraut, German potato salad, squash casserole, with 5 or 6 different flavored mustards. There was other food but this was the main event and was enjoyed by all.

Now onto the serious stuff: the beer. I don’t know if I listed everything below but we had a total of 28 beers dress up in coat and tails for the event.

We only happened to get through 15 of the beers throughout the course of the evening (spouses and children running around made it tough to concentrate and I had to fix the WII at least a half dozen times). I know, you could consider us lame. Most of the attendees didn’t’ care for the nutmeg and all-spice of the pumpkin beers and then, to top it off, we all thought the Oktoberfest beers to very similar. You could say that is good or bad. We leaned the negative way: the whole idea of American craft beer is for the individuality of their beers. We probably didn’t even try to consider the fact that we never cleansed our palates for another beer.

Because I was the only trying to actually do review, I eventually gave up and truly tried to enjoy the evening and the company. I was fortunate to have enough beer at the end of the night that I could keep one of each beer so that I can do my own tasting over the next two weeks or so. I play on trying to get two or three reviewed per evening, starting off with a pumpkin and Oktoberfest beer so that my palate doesn’t get overrun again.

The best Oktoberfest that we tried, in my opinion, was Bell’s Oktoberfest. Good, crisp beer that was an overall nice beer that everyone liked. In the future I don’t know if I would do another Oktoberfest tasting. I would want a style of beers that has more artistry behind the style. IPA, porters, and stouts quickly come to mind. Needless to say, I am busy planning the next festival in my head. Only time will tell what it will be but I think, at least at this time, I am leaning towards a more public type. Enjoy!