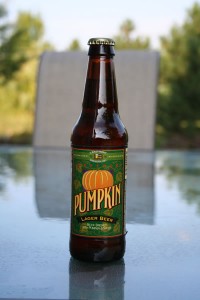 Lakefront Pumpkin Lager by Lakefront Brewing Company is a pumpkin beer that was very drinkable and crisp. It had a slight head on the beer that disappeared very quickly until there was no trace at all. A nice amber color that had good spice, malt, and a trace of hops on the nose. The spices weren’t as noticeable in the taste while it was light in body with medium carbonation. I have had other Lakefront beers (especially on the brewery tour) and will have to say that I expected a bigger, better beer from them. No, this isn’t a horrible beer, I would drink it again, but the body of the beer is really light. free run 3.0 v2 femmes I feel like “transition” beers like these should start to bulk up on the body.

The second beer of the night was Harvest Moon Pumpkin Ale by Coors Brewing Company. The beer started off nice with a nice tan foam but lasted like a robber running from the police. The aroma and taste was more of an Oktoberfest style beet to me than a pumpkin beer. I don’t know if this was suppose to be a twist of styles or not. Despite the amount of malt, the body was light but the carbonation level seemed fine. My wife made the best observation about the beer: “It doesn’t taste like much.” I think that says just about everything I need to say. It is a macro brew that smells, tastes, and acts like a macro beer.

Four beers of the 28 down from Two Beer Dudes American Oktoberfest. No drinking tonight, I have hoops. More to come on Friday. Enjoy!