Saturday Get Together Ends In Darkness 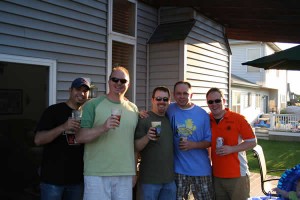 Saturday’s get together was a really good time for all: beer drinkers, spouses, and kids alike. The burgers, hot dogs, brats, and chicken on the grill hit the entire gambit of what anyone would like. The edible waffle bowls filled with ice cream was a perfect after dinner touch that kids and adults both enjoyed. The games of bags were fun, especially if you won. Thank you Mark and Carmen for opening your house to us all.

Each of the guys brought their own touch to the party in terms of beverages. West Coast IPA by Green Flash Brewing Company, Hop Whore by Tyranena Brewing Company, Marsala Mama by Townhall Brewing, and Collaborative Evil by Flossmoor Station Brewing Co. were all beers that everyone tried. There was nike kobe 9 even some Pabst Blue Ribbon. 🙂 My favorite of these beers was Hop Whore. It is a mighty good Imperial IPA that finishes smooth with no alcohol presence. Both Marsala Mama and Collaborative Evil were in bombers that had been shipped from Minnesota and sat for a good 7 to 10 days. I don’t know if this had anything to do with my experience, but neither lived up to the hype. We all agreed. 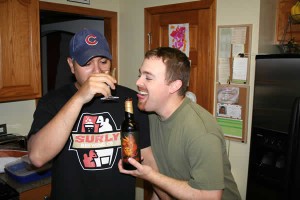 Yeah, Darkness by Surly Brewing Company is that damn good!

During the evening Ed went around to each of us and let us know that his wife is pregnant with their first child. A very special occasion. Congratulations! I am excited for him and his wife as he will make a great father and loves kids. In honor of the news, Mark went down into the cellar and and broke out a bottle of Darkness by Surly Brewing Company.

Darkness, oh sweet Darkness. That is one fine beer. We had 2008 at cellar temperature. So smooth, so fine, so damn wonderful to all of the senses. This beer is the best Stout I have had to date. I will be making the trek up to Minnesota in a month with Mark to get some for myself. 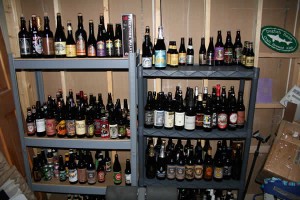 Speaking of Mark’s cellar: what a wonderful site for any American craft beer lover. It is truly a great collection. There easily had to be 125 bottles (mainly bombers) nike kobe 9 elite gs of hard to get and highly sought after beers. I thought I was in a beer museum or beer heaven; maybe both. He has beers that are numbered and one really rare one in which only 30 or so bottles were every created. You could easily say it was a celebrity list of beers. Next time I am over I will take my shoes off before entering the sacred cellar and never look a beer straight in the eye. The best thing about all these beers: Mark wants to share and enjoy with the group. That is awesome and greatly appreciated.

I even got an invite to the Tuesday Night Beer Club (TNBC) a once a month get together by Ed, Mark, Shawn for sharing good American craft beer. From what I understand the group is growing too. More to come as I find out the details. Enjoy!