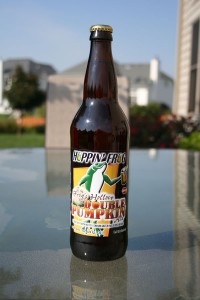 The beer store across the road from work is my usual Wednesday afternoon break location but I had need to stop by on Friday so that I could show Travis (beer buyer for the store) the final beer selection for Two Beer Dudes Inaugural Oktoberfest. I wanted to show Travis to make sure the beers that I thought attendees could purchase in our area, could actually be found and were produced this year.

Good news, free run 6 femmes we only had one causality from the list when the original list had some 28 beers on it. That’s a damn fine ratio.

Now the real score of the afternoon was being able to get my hands on three bombers of Double Pumpkin Ale by Hoppin Frog. Hoppin Frog is a little bitty place in Ohio and doesn’t make a ton of beer. Travis mentioned that the guy who distributes for them does so out of his car. 😀 Anywho, they only sent 25 cases of this pumpkin goodness to the Northern Illinois area. I believe the beer store only had one, so getting three bombers of the twelve is a huge score towards the beer selection at Oktoberfest. Enjoy!