Capital Brewery painted sign on top of the building. Had to pull off on the side of the highway to get this shot.

The brewery hops started an hour later than expected at 9:00am but we really didn't have anywhere to be, so an hour late wasn't going to hurt. We followed the gps directions to New Glarus Brewing Co., which took us a much different way than the last time we went. I enjoyed the no traffic roads but there was 20 left and right turn along the way, as well as two bridges being completely out for construction, adding 20 miles to entire drive. I gave the gps a stern talking to and we are both now on the same page.

My middle child wanted to go (run) through the brewery again. Done. air jordan 4 femmes The wife and I had a quick taste test (10 minutes tops for all three) and we were down stairs picking up some delicious bottled liquid. Mixed six packs, some Unplugged, R&D Golden Ale, Raspberry Tart, Belgian Red; you start to get the picture we purchased the entire joint. Not that you will believe but most was for beer friends. 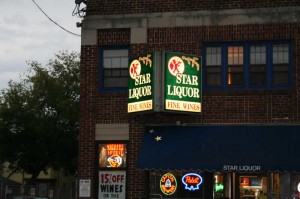 I was looking for at least one snifter glass on these brewery hops but couldn't find one at any of the breweries I visited. My wife has a Crate & Barrel gift card, just wait until she goes to sleep and I will have new glasses. 😉

The next stop on the tour was Middleton, WI to take a 3:30pm tour of Capital Brewery. There was time in the itinerary (yes, I am anal and put together a two page spreadsheet itinerary) to visit Lake Louie Brewing in Arena, WI but after a phone call that went unanswered (which Tom, the owner, told me they might not be there), so we found a public park that had a nice picnic area, lake, play ground, and water park to eat lunch. Of course the anticipation of playing in the water led to light lunches for the three kids.

Unfortunately it started to rain and we decided to head over to the actual brewery. It was still only 2:30pm but it was time to enjoy a beverage. Once at the brewery we decided to drive over to the hotel instead of keeping the kids all cooped up with the rain, especially after they starting running in the rain and getting their clothes all wet. 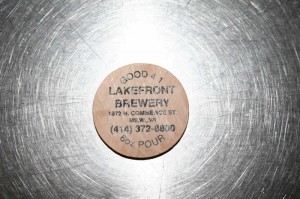 Lakefront Brewing Company tour coin that allows you to get one of your four allotted eight ounce beers while on the tour.

Amazingly the hotel I booked in Madison, WI was a mere 1.5 miles away from Capital Brewery. We were in-and-out and back for a beer within 20 minutes.

I had the Wild Rice and my wife had their Wisconsin Amber. The kids had pop and water. Yes, pop, it was vacation time.

The tour led to one tidbit of information that surprised me: Capital Brewery does all of it's bottling at a remote brewery.

After the tour we found our way to Madison for dinner and a stop at Star Liqours. air jordan 4.5 femmes Star is a small store that from the outside sort of lead me to believe I was going to be disappointed. Umm, yeah, I am dumb. Adam, the manager, loves beer, loves to talk beer, and lent a hand in selection. Star has an awesome selection of beers from the area and from some breweries that I can't buy from in Illinois. Most notably: Oskar Blues. 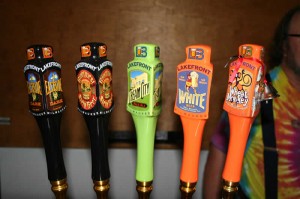 Lakefront Brewing Company lineup of taps at the bar where you wait for the tour.

Day two of the brewery hop tour started early, again: 10:00am. We had a 12:00pm tour reservation at Sprecher Brewing Company (the only way you can do tours there). The drive to the Milwaukee area is about 90 minutes and I wanted to be early, as usual.

After about ten minutes of driving I brought up to my wife that I would really like to try and do Lakefront and Tryanena since Sprecher is the easier of the three to visit in terms of the number of tours. So after a promise of not to rush too much, we changed courses for a 1:00pm brewery hop at Lakefront Brewery and a 3:30pm brewery hop at Tyranena Brewing. 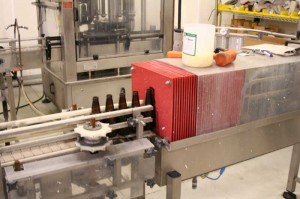 What a complete stroke of luck: Lakefront actually started doing noon tours, because of demand, and by the time we were done with our tour they were sold out for the rest of the day. So, if we had gone to Sprecher there is no way we could have gone on a brewery hop at Lakefront.

The Lakefront Brewery tour is aimed at all ages and all interests of the brewing process by encouraging group participation and some light comedy. Entertaining. They also give you a lot for the $6 tour price: free 8 ounce glass, four 8 ounce testers, one pint glass, and the tour. There was also an air and water show going on in Milwaukee so the kids and myself thought it was cool when the F-16 buzzed overhead a couple of times. Damn hot rod of the skies! Very loud, very fast, very cool. 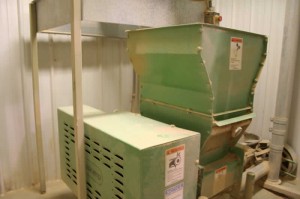 Tyranena Brewing Company malt grinder preparing the malt to go into the mash where it will mix with water starting the brewing process.

After some pizza for lunch and enjoying the sun on the river outside the brewery, it was time to pack it up and head back towards Lake Mills, WI and Tyranena Brewing Company. air jordan 5 femmes The 50 minute drive back was full of anticipation and I couldn't wait to hit my third brewery hop in a little over 24 hours.

Tyranena is a smaller brewery but they have some quality and tasty products. The tour was very education as it was led by the assistant brewer, Nevin. He shared a very thorough knowledge of the brewing process and how it is done at Tyranena with the group. They even have some hop plants growing out back.

A lot of driving, a lot of walking, a lot of questing, a lot of tasting equals a crap load of brewery hop fun. I don't know if this is true or not, but one bartender at Lakefront mentioned to me that kids in Wisconsin can drink as long as they are with their parents. Nice law. Each brewery hop had its own twist on what to share with the group of people but each always centered around the idea of making good American craft beer. I look forward to planning another big trip like this either in the fall or spring. Heck, maybe I can talk the wife into one in the fall and on in the spring! My next brewery hop will be to Two Brothers Brewing Company in Warrenville, IL. Hopefully I can get Rich out there with me too. Enjoy!

New Beer From a Traveling Neighbor