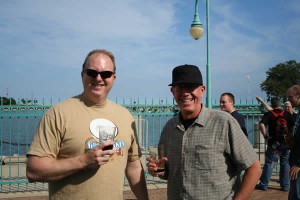 Great Lakes Brew Fest was ran without a hitch and ran smoothly as far as I could tell. I was impressed with how well oiled the machine seemed to be.

The park that the Fest was held at is situated right on Lake Michigan, the day was perfect in terms of weather: 70 degrees, sunny, minimum wind.

We arrived about an hour early (2:00pm) and went to the Fest to pre-register. We scored our glasses and decided it was time to get some grub. We ended up getting some Mexican food a little over three blocks away. Back to the Fest. We walked right through the long line and received praise from Rich and Sue for the early sign-up idea. roshe run femmes By the time we made it through the roofed area, the clock struck 3:00pm, the doors flew open, and we were off. 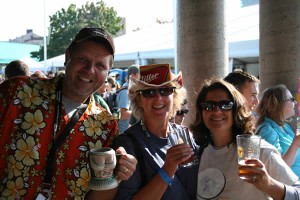 A couple of people Sue stopped to talk with at Great Lakes Brew Fest.

Rich wanted to check out the Michigan tent first. We had some Bell's Brewery, Dark Horse, Founders Brewing, and Jolly Pumpkin Artisan Ales. All breweries we are familiar with but ones that we definitely wanted to visit. A good quick start to the day. While at Founders Brewing they had a sign up stating they would be tapping a keg of Curmudgeon that had been oak aged for a year at 4:15pm. Everyone was cool with the idea of coming back for that special tapping.

Now we just decided to go somewhat counter-clockwise through the rest of the Fest. Next was a tent with Colorado and California beers, mainly. We had some Lost Coast Brewery, Fort Collins Brewery, Oskar Blues Grill & Brew, and Avery Brewing. My wife really enjoyed the Tangerine Wheat from Lost Coast Brewery and requested that I find her some locally. It’s good to have a wife that enjoys drinking almost as much as I do. 🙂 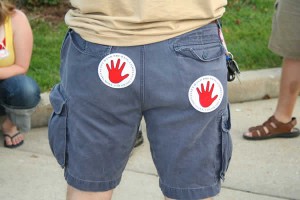 Left Hand Brewery found it's why every where. (wife liked this one)

Next we headed back to Founders Brewing for our 4:15pm date with Curmudgeon. My full 12 ounce serving of this beer was damn tasty. I finished it within the same amount of time Rich and Sue had their three ounces.

We headed towards the central councourse that had a middle, north, and south ends. We started with middle. First stop: Metropolitan Brewing a local brewery from Chicago, IL. Doug and Tracy are husband and wife that team together to make, currently, three good brews: Krank Shaft, Flywheel, and Dynamo. They have a new release coming out in November named Generator Dopplebock. Tracy follows us on Twitter and is familar with us and we received an invite to check out the brewery. Should be a fun time. I wish them luck as they work hard at their craft to make some good brews. Check them out if you are ever in the Chicagoland area. 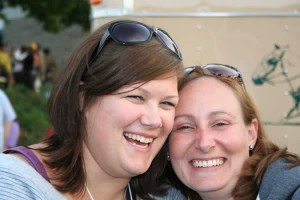 Some ladies enjoying the Fest.

The last area we headed to was the south portion of the central concourse. Mainly Wisconsin breweries. As could be expected there was a lot of breweries in this section, big and small. We had a long stay here: Lakefront Brewery, Capital Brewery, Tyranena Brewing Company, Buffalo Water, Water Street, Furthermore Beer, and Ale Asylum.

As the night winded down we ended up at the only brewery that was still serving and serving large: Left Hand Brewing Company. They were serving up MooToo which was a mixture of Sawtooth Ale and Milk Stout. Unique and darn tasty.

There was a brew club area in which at least a handful of brew clubs were represented. I would have liked to spend some time there but Rich and Sue wanted the “normal” breweries. Maybe next year.

Tons of good beer that I didn’t have also but I would have needed another eight hours to get it all. Overall everyone had a great time and I hope to make another trip up there next year. Enjoy!