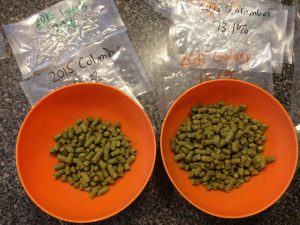 Yes, I always seem to take pictures of the hops I use.

The Dude is a homage to my nine year old son. When he was born, I was on a huge Big Lebowski kick. I couldn’t get enough of the movie. Of course, it was only natural, to bypass his given name and refer to him as Lil’ Dude. I used the nickname so much that family and friends referred to him as Lil’ Dude as well. He was known more by his nickname than his real name.

Now that he is nine, he doesn’t seem so little. He has graduated to just “The Dude”. I enjoy watching him grow up (as I do both of my girls). This beer is named after a fun loving kid that enjoys video games, basketball and playing with friends.

There were two changes I was going to make to this beer: water and a complex hop profile. I was finally going to use the reverse osmosis system that I received for my birthday in October. My plan was simple: cut the brew day water in half, 50% tap, 50% reverse osmosis. This wasn’t a complex plan or overly thought out. It was somewhat easy. I have tried to read books and forums on water but it seems to bounce of the thick skull instead of soaking in. Therefore KISS: Keep It Simple Stupid.

The second change, complex hop profile, was going to take a bit more thought. Looking up the hop profiles (again and again) helped me to understand the profiles of each hop. Past brewing days and notes also aided in choosing the hops. On hand hops played a role as well.

Eureka and Equinox were definitely going to add quality subtle complexities. Galaxy, Amarillo, Columbus and Mosiac each have big characteristics that add distinct aroma and flavor. Layered the complex nature of the helps should meld well together. Enjoy!

Recipe for The Dude IPA