By scot in Beer, Home Brewing on Tuesday, December 6th, 2016 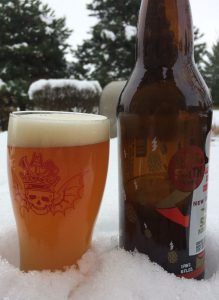 Azacca is the focal point of this IPA: a new hop profile for me. I could only predict what I thought might happen rather than have confidence in a known outcome. Probably not the smartest to pair it a beer with three pounds of rye: what is the actual profile of the hop? felt the rye should play nicely with the supposed tropical fruit and, especially, the citrus profile of Azacca.

I have brewed other rye centered beers: Rye IPA, Texas Wedge Rye Saison (multiple times), and tasted some commercial beers along the way. It seems that my palate has yearned for more rye. This the reasoning behind the three pounds of rye.

Look: Pours a cloudy gold orange. Inch of whit foam. Retention is what is expected of the styles: loiters for bit before receding almost completely. Sticky lacing that coats the sides of the glass throughout.

Taste: Rye throughout. Juicy mango, pineapple and orange citrus are boldest. Rye pushes through late, lingering almost like a bitterness. More pepper as it warms, especially in the finish: rye and columbus.

Hands down, azacca is a solid hop. I am glad that I paired this hop with rye. An amazing combo with the columbus syncing with the rye. I will have to brew this beer up again, shortly. After re-reading the review I gave rye ipa earlier this year, I really need to ramp up my rye beer production. Enjoy!

Useless Fact: Movie theater popcorn costs more per ounce than Fillet Mignon, the price of Popcorn is more than 1200% higher than its production cossts.