By scot in Home Brewing on Tuesday, February 4th, 2014 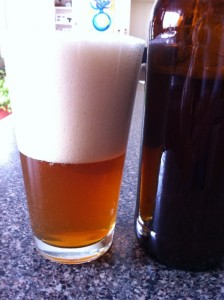 Almost two months ago, I brewed the inaugural TNBC beer: TNBC One. It was to celebrate the last several plus years of friends getting together to share in American craft beer and home brews.

Unfortunately our schedules haven’t worked out and I have been “stuck” with 5 gallons of home brewed DIPA. I have been appreciating the beer for the better part of a month. The beer has developed, mellowing from both the hop and malt end, creating a more well balanced beer. Definitely not perfect…

Look: Slightly cloudy. Could be chill haze from proteins as I didn’t use Irish moss. Typical orange/gold color of most of my recent IPA offerings. The head is thick, frothing up as it recedes, leaving a sticky, web-like lacing behind

Aroma: Lots of hops. Citrus, floral and abundant. The malt is a bit more pronounced than expected: bread/biscuit.

Taste: The citrus and floral hops are muddled together. Neither is clear but believe that is assisted by the amber malt, confusing the palate by adding a huge mix of biscuity flavors.

Drinkability: Medium or better body but lower carbonation than I would have liked (in spite of the huge amount of head). Dry finish. Alcohol is not evident.

Overall: The hops are fantastic. The combination of the Citra, Amarillo and hopping techniques created a huge amount of flavor and aroma. In spite of this, the amber malt lends too much malt profile, bringing down the joyous celebration of hops.

I would brew the beer again but drop the amber malt down a few notches; 8 ounces at most. After the re-brew, I would check to see the brightness of the hop profile to see if that needed tweaking as well. Enjoy!

Useless Fact: During the time of Peter the Great, any Russian man who wore a beard was required to pay a special tax.