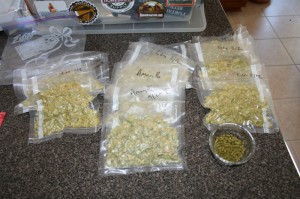 Tuesday Night Beer Club was an invention of a few friends of mine. As each of our lives changed the club fell apart several years ago. I am by far not the reason it fell apart but my job changed, creating more travel for me. It was almost impossible to make the monthly journey a few months before it completely ended. As I dropped out, I realized I needed to have a fix.

I set up my own version of TNBC: Thursday Night Beer Club. Different night, different people but still centered around American craft beer. It didn’t exactly start out that official, it still isn’t. Rich and I were contemplating the idea of a web site, this one: twobeerdudes.com. We decided to get together on Thursday nights, occasionally. It gave my wife the ability to go work out, me a chance to watch the kids and for Rich and I to “discuss” the web site. Having a few American craft beers a couple times a month developed into most Thursdays and, at times, upwards of six guys (if our schedules can all fit). Every Thursday has been hosted at my house and most of the beer has been mine (helping to clean out the cellar from my crazy trading days in 2008 – 2009 (I still have a ton left). My kids, wife and few of her friends have joined us at times making for an interesting mix. Heck, one of my wife’s friends surprised us with her craft beer knowledge. Of course she walked home with a few home brews for her and her husband.

More and more home brew has crept in over the last couple of years as Chuck, Pat, Rich and myself have contributed malty concoctions of our own. Each memorable in some fashion. It was time to brew up an inaugural beer to commemorate this coming together of friends, family and beer. The idea of TNBC One was hatched. Something big, something hoppy (I have been craving hops lately), something memorable: Imperial IPA.

I wanted to use a malt I hadn’t used in the past, combined with outstanding flavor and aromatic hops, dry, while not ruining the palate for a week. I had been playing around with first wort hopping for a while, it was time to try out whirlpool hopping without any bittering additions. I wasn’t sure that amber malt belonged in an Imperial IPA but lack of other malts and low mash temperatures should keep the profile minimal.

TNBC is a great way to welcome in the weekend, a day early, with a few beers and, most importantly, with friends. Enjoy!

Useless Fact: There are 240 dots on an arcade Pac-Man game.