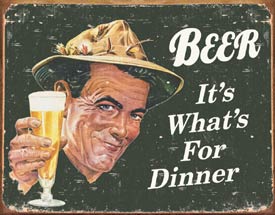 I have to start off by saying thank you to my in-laws for purchasing tickets to a beer/dinner event in which they included Rich and his wife along with my wife and myself. Completely unnecessary but 110% appreciated and enjoyed by all.

This happened to be my first beer dinner (sort of hard with three young kids). I didn’t know what to expect but had thoughts from the different blogs I have read about other people’s experiences.

I have to say my expectation was a bit different than the actual experience.

There is one main reason for this: the American craft beer was provided by a set of local home brewers that have aspirations to become full time brewers. The provided four beers, in my opinion, as three of the actual six where just a tripel that they played around with: tripel, tripel on french oak, tripel on french oak and bourbon. They also had a wit, porter, and rye/wheat pale ale.

My favorite of the six beers was the tripel on french oak. I would probably rate it around a low to mid range seven. The rest were varying degrees of beers that didn’t agree with me. The porter, which was aged on ancho chili (I believe powder) and pomegranate, was just overwhelmingly on the chili side. The last sip I took almost made me gag on chili and it also made me sweat.

I look forward to another beer dinner but I will make sure it is by professional brewers in the future. Enjoy!

Useless Fact: If you fart constantly for 6 years, 9 months and 23 days you would produce enough gas to explode an atomic bomb.