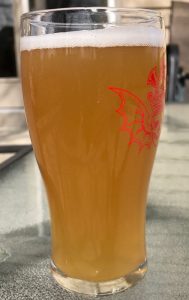 The short brewing cycle of North-East India Pale Ales (NEIPAs) is aided more by kegging the final product to go from brew day to glass. Here I sit only 15 days after brewing Swim? Swammi? Slippy? Slappy? Swenson? Swanson? NEIPA and I am reviewing the tasty elixir.

I have to really enjoy this keg as it will be the last that I have in at least six months of my home brew. I am undergoing surgery that will not allow me to lift for some time. I am worried about all the stress reliever brew days that will pass without a brew day. Hopefully I will be back at it before the end of 2018.

Taste: More sweetness than I expected. Mango and pineapple carry throughout. Sweetness stays in the side of the cheeks and front of the tongue.

Overall: Citra and Mosaic definitely help a beer out. The citra does add a lot of sweetness to the beer. I assume there is a place in which it would be overwhelming.

This beer is my last home brew for quite some time and it did not disappoint my senses. Six months should more than enough to come up with some more great hop combinations. Long live Mosaic and Citra in hoppy beers. Enjoy!