By scot in Home Brewing on Saturday, November 9th, 2013 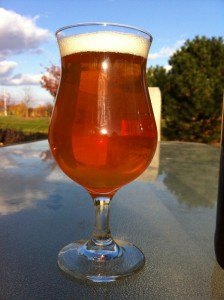 The reason I brewed Mais Epice has a story behind it that I documented already. An official tasting has come after multiple tastes of the beer (typical of my write ups). If it wasn’t for my methodical ways, this beer probably would have received poor reviews, if I was in a good mood.

Fast forward almost two months. I tried the beer about a week ago, noticing how the anise had mellowed and the beer rounded out, balanced. I was much happier with the beer and it was time to share with friends.

Look: The beer has a pour perfectly clear,with a nice orange/gold color. The foam is a half-inch thick. The retention is about normal for a saison while there is barely any lacing.

Taste: Similar to the aroma, the base Saison comes through with a supporting cast that adds complexity. Star anise, pepper and bitterness all come in mid-to-late, lingering gently but not overwhelming.

Drinkability: Medium body. Medium carbonation at best. Tiny bubbles fill the mouth to aid in the body. Maybe not enough but the combination is fine for the beer.

Overall: A month has mellowed the star anise, creating a much more balanced and therefore complex beer. I can have one or two of these a week before it becomes to much for me.

I will be this again but not something that will ever make my “normal” rotation. Thanksgiving time might be the best time for this beer; brewing it 10 weeks or more before the date. Enjoy!

Useless Fact: Drinking a banana milkshake is a perfect cure for a hangover.