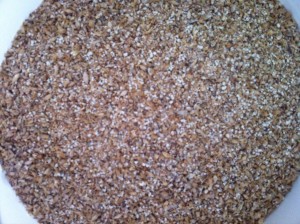 Adjusted Monster Mill to .035 since I was disappointed with the last crush.

I enjoy spending time with my family during the holidays. This year I took the two weeks off to coincide my wife and kids being off work and out of school respectively. Typically during this time I brew 4 – 6 batches, mainly fermented with bugs. This year I decided to start working on the basement, leaving little time for home brewing.

With the end of my vacation quickly closing in, I decided to make a thrown together beer. I went to the basement to see what goodies might be available for making a pale ale or IPA. I knew there was plenty of 2-row, Munich and red wheat. Down to the basement (note to self: cellar sounds better than basement). I found a half pound of victory and a half pound of . The hops. The freezer. Willamette and Galaxy. Hmm. Sounds like an interesting mix. 4.0 ounces of each should do the trick, cleaning me out of both. The hops were split between first wort, whirlpool and dry hopping.

I wasn’t overly thrilled with the aroma as I brewed the beer. I thought the Galaxy would really grab me. I haven’t worked with Willamette. It wasn’t until I smelled the blow off that I really understood how well this combination of hops was going to be. Just a bit more time until I find out. Enjoy!

Useless Fact Alabama was the first state in the United States to officially recognize Christmas in 1836.