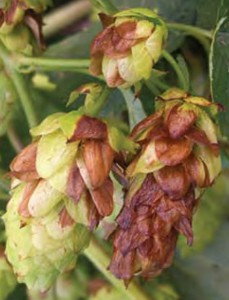 A few months ago I brewed a hopped up wheat beer: Hoppy Wheat. When I tasted it, there was something wrong. I couldn’t place it but was learning towards the hops. I thought I might have had a bad group of hops. I decided to scratch the beer, brew it again and brew an IIPA while I was at. Hoppy Wheat Part 2 and Alpha Acid Aspirations – Eagle where brewed.

I was eager to try both, so why not make the Thursday night group taste the week-in-the-bottle brews too. Of course they were slightly under carbonated. I wasn’t worried about that, I wanted the “Oh, this smells fantastic” praise that accompanies over-hopped tropical style beers. There were none. I was the first to bash myself. The hops: Citra, Amarillo and Simcoe, preliminarily, between the two beers wasn’t there.

What was wrong with the hops?

I first blamed it on the 2011 hops. They were old. They had lost it. Shitty hops. Paid a lot of money for those.

Then the rashness of my decisions started to wear off and I did what I do best: started to analyze the situation. I also discussed with the group of guys (Rich, Chuck, and Pat) that I painfully brought through the process with me.

High aroma/flavor hops lacking those elements while seemingly vegetal with that being light. I know I had read somewhere that hops can get oxygenated. How would that have happened? Each hop had come packaged in a one pound bag that I never broke down and/or vacuumed sealed. I had opened and closed some of those bags 6 times, if not more, over the past two years. Allowing tons of oxygen into the bags to mingle with hop goodness that once graced the said bag.

Moron. In spite of all my analness, I have never dated or taken great care of the hops I purchased. How could I have not have had this on my radar? Frustrating that I am the demise of my hop inventory.

I still want to purchase in bulk, cheaper, but now I need a new piece of equipment: food saver of some type. Easy to purchase but I need permission from the boss to spend more money on this hobby (new brew kettle and freezer). I have to find her at a soft moment moment, striking quickly. Enjoy!

Useless Fact: It’s estimated that at any one time around 0.7% of the world’s population is drunk.