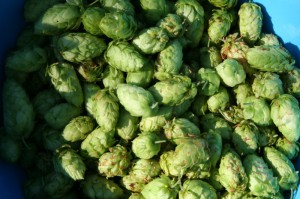 Petite saisons are gaining more traction in the home brewing community as well as the craft beer community. The thought behind this “small” versions has several motivations that could be taken separately or grouped:

My goal, at least the first time around, was three fold: make a nice low alcohol Saison, with flavor, while using hops from the yard. The low alcohol was the easy part, just use less grain overall. Since the grain was low I stayed away from any “straight” sugars to allow for as much flavor as possible. In order to get more flavor and a twist, I went with Maris Otter for the majority of the base malt. Not historical but different, hopefully adding some interest. I used all my wet hops for the season: 15 ounces of mostly Cascade, sprinkled with Mt. Hood (1 ounce).

On brew day I harvested the hops, weighed them, and split them into three groups of 5 ounces. Since I had so many hops I pushed the mash temperature up to leave more sweetness in the beer, allowing to combat the bitterness from all the hops even though they are late additions.

This was my first after work on a Friday brew day. I thought it would be painful but it actually turned out great. I had brewed, racked, cleaned and completely finished brewing by 11:00pm. The weekend had barely begun and I already had yeast working. I am going to have to look at Friday brewing more as it seems to leave the rest of the weekend in front of you. Enjoy!

Useless Fact: If you attempted to count the stars in a galaxy at a rate of one every second it would take around 3,000 years to count them all.