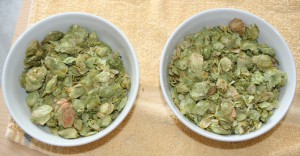 I brewed Hoppy Wheat for the first time in April of this year. That first brewing went well but I screwed up bottling. I under-carbbed. I was supposed to add 4.5 ounces of priming sugar but for some reason I wrote down in my notes and used .45 ounces. I never gave that beer a chance.

The day that I brewed this beer was only a day after I brewed Alpha Acid Aspirations – Eagle. Since Eagle uses a heaping helping of Amarillo, I changed the hop in Hoppy Wheat to Citra. I have almost two pounds of the hop and I didn't want to be “stuck” with 10 gallons of Amarillo centered beer. I like variety.

Outside of the hop change from Amarillo to Citra, nothing different between the two recipes or brew days. Enjoy!

Useless Fact: During the chariot scene in “Ben Hur,” a small red car can be seen in the distance.