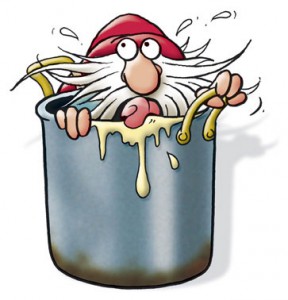 I have been attempting to brew a quality milk stout since I was extract brewing. That first version used Hershey’s powdered chocolate in the boil. It basically fell out during the fermentation process (typical four weeks). Once I began all-grain brewing I tried my hand at version two of Pot Licker. I used cocoa nibs in secondary. This seemed to work well for me. Chuck, Rich and I decided that the beer wasn’t creamy enough; I vowed to thicken it up the next time around.

In the second version I only used a half a pound of lactose (milk sugar) while aging a gallon of the beer on cocoa nibs and roasted jalapenos (fresh from Rich’s garden). I decided to up the lactose to one pound for this brewing of Pot Licker and, since I don’t have fresh jalapenos to use, I will bypass.

Pot Licker is the first non-sour I have brewed in while. I am looking forward to a quick turn around yielding a brew I can drink in a month. Enjoy!

Useless Fact: The phrase “rule of thumb” is derived from an old English law which stated that you couldn’t beat your wife with anything wider than your thumb.