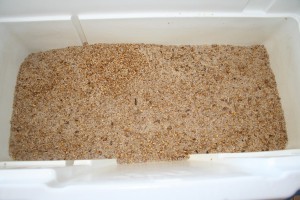 Bad grain crush due to putting the drill in reverse.

After having the last bottle of the first batch of Brett Backspin Belgian Pale Ale about 45 days ago, I kept kicking myself in the rear for not brewing again before batch one was no more. I didn’t think that far ahead. Time to brew round two but how to make it better?

For the aforementioned 45 days before the brew day I ran scenarios through my head on to make this round a bit different but not stray too far away from the original. One simple solution: add Brettanomyces lambicus to the Brettanomyces claussenii that I used last time.

I created two 1 liter starters for each of the Brett strains. For the first time I tried using a flask for one of the starters. Once I started to chill the starter it became apparent that the flask wasn’t go to cool off as easy as my typical kitchen pot. I don’t use thermometers for starters as I have always been a good gauge of temperature. The flask changed everything. I don’t think I ever got the temperature down and the yeast never took off. I decided to forgo the Brett lambicus on brew day. At least I should have another good Brett beer to last me.

I milled the grains in a hurry. Chuck was over and wanted the mill back. I grabbed the mill, weighed the grains and brought it all outside with the drill. Unfortunately I didn’t realize the drill was in reverse. I figured it still rotated, didn’t check the grain, assuming that it should have been cracked. About 50% of the grain was milled in this fashion. Dumb ass. On brew day, as I poured the grain into the mash tun, I noticed that half of the grain kernels weren’t cracked. Crap. I kept with the schedule, doing everything as planned. The aroma was great but the efficiency, as expected suffered (see below).

I only have a couple of months to wait to see if this beer turns out. I think it will but when I rack to secondary I am going to grab some of the yeast and brew again. I should write a book: Brew Like A Moron. I have an enormous repertoire and skills in the subject matter. Enjoy!

Useless Fact: American Airlines saved $40,000 in 1987 by eliminating one olive from each salad served in first-class.