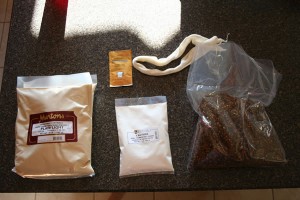 Brew day number two is all over; nothing more than a memory and some notes on a piece of paper. I decided to go the route of making my own recipe for this one to feel that I was in a little more control.

I ended up with 2.5 pounds of grain that I steeped, adding 5.4 pounds of pale dried malt extract (DME) and a half pound of lactose. The lactose, half the DME, and 1 ounce of hops were added at boil. I added eight ounces of Hersheys cocoa with 10 minutes left in the boil.

By now you probably realize that Pot Licker is a milk chocolate stout. free run 3.0 v4 I hope there is some bitterness from the hops, malt, and chocolate while the sweetness from the malt and lactose balance out, hopefully even slight creaminess. 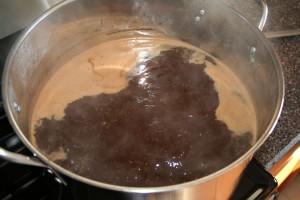 I plan on racking the beer twice outside of the primary as there is a lot of cocoa in the beer. I don’t care if the beer is clear but floaties might freak some people out. The total amount in the carboys will be in the range of 4 – 5 weeks. At that point I will bottle and let it age for a good 4 weeks in the bottle. Six of the bottles I would like to add a few drops of coconut extract to make Pot Licker With Nut. If it is bad, then it will only be a few nasty beers to dispose of on friends. 😉

Unfortunately it will be February before the beer is ready. I hope it is as good as I imagine it to be. Enjoy!