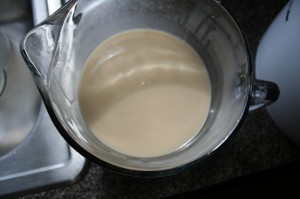 I have been trying for well over a year to get some Easy Coast Yeast (ECY). The yeast is produced in small quantities and the stuff that I have been after are the highly sought after critter mixes: 01, 02, 03, 04, etc. When only 10 viles of a mix come out at a time, maybe once every six to eight weeks, that tends to make them hard to get. I was able to pick up ECY01 and ECY02 the last go around.

The strange thing about finally getting the yeast: what to brew. I had concentrated so long and hard on being “in line” to get a taste that I lost sight of what I could do with the yeasts. ECY01 intrigued me more so I did a bit of research on the yeasts and bugs that reside in the small bottle.

It didn’t take long before ideas of lambic were dancing in my head.

Never done a lambic. Never thought much about one. Never have tried many. Definitely don’t know how to brew one.

I knew what I wanted to do with the yeast but I didn’t know how to brew a lambic. Of course I turned to The Mad Fermenttionist and google.

I found A Liddil Lambic Lesson: The Cult of the Biohazard Lambic Brewers on google but found the long text a bit daunting. Besides I had never heard of turbin mashing, it sounded difficult.

Mike had done a handful of lambics that he reported on his site. He mentioned that his Lambic 3.0 was the best he had done. It as done via a turbid mash. One of the places he found information was the aforementioned A Liddil Lambic Lesson: The Cult of the Biohazard Lambic Brewers but had pinpoinnted what really needed to be read.

In the course of getting prepared for brew day, I read Mike’s notes many of times, asked him various questions via email and read the entire Biohazard Lambic site at least a handful of times. The pictures on Mike’s site help to piece the two together.

I wouldn’t say my brew day went smoothly. I feel there were some rough edges, specifically with trying to keep 1 quart of wort at 176*F. That proved very daunting based on the size of the pot and all the large pots on the stove. That temperature was all over the place but I believe I did get it up over 176*F. Next time I would use one of the wife’s 2 quart pans to give the liquid more vertical volume, allowing a thermometer to better gauge the temps. This would also open more room on top of the stove with the smaller footprint. I should have enough room in the pot for the additional 4 quarts that are added later in the process.

I started taking pictures but the process and purchasing Dark Lord Tickets sidetracked me. I will be brewing another lambic via turbid mash in the next month (using some of the yeast cake from this beer). I plan on taking more pictures, documenting the process (video, maybe?). Enjoy!