This annual (8th) Chicago/Illinois Brewers Guild brew fest works so well on multiple levels that I am absolutely adding to my annual list, in the category “Absolutly Will Attend Events”. The overall vibe, venue, flow, cost, and oh…brew line-up is flat ass perfect. 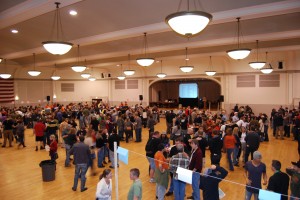 First, is the fact that only 500 or so tic’s are sold at each session makes the thing managable on a scale that makes interaction with the brewers and follow attendee’s personal and approachable. In the afternoon session that I attended it seemed as though most of the brewers were actually in attendance. That partly is attributal to the event being organized by a Brwers Guild that’s still small and seminal enough to still  be faternal and supportive. And, the competitive stuff seemed so much more friendly than any ego, sports-dickhead beat me stuff. And I met the insurnace broker for the ewvent, who seemed new to the craft beer scene but was a very vocal advocate and added some interesting factoids that helped me get some insight into the organizational elements of pulling this thing off. Plus Chicago’s brewing community seemed totally respresented. Got to spend a little time with Annette May, Cicerone and beer mentor who always shares her great insight. 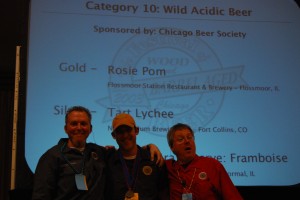 Then there’s the Journeymen Plumbers Hall. Aisde from the obvious advantage of holding a beer drinking event in a building that should and did have perfect plumbing facilities. Being a big fan of architecture, the hall is retro and a pleasing place, kind of reminded me of a  upscale 1950’s high school gym and stage. Loved the place and the great West Loop neighborhood.

Again, the managable crowd size of 500 each session was really nice. I’m sure it’s partly due to nature of the brews at this fest. Think about the name of the event and the additional effort, time, and ingredants of the brews represented. And these categories tend to includes an inordinate amount of limited, special, and experimental brew batches that are inherantly on the low side of volume. But, I think there’s a design on the part of the organizers to keep this thing more intement. There’s no sense of making this some mega statement, it seems more like a celebration of skill and friends.

On the cost front, I am utterly and a completely statisfied participant. At $35 for 12  3-oz pours, it appears on the surface to be a mediocre deal. But, when you consider available brews like Lost Abbey’s Angel’s Share that $16 for a 350 ml (11.8 oz) bottle (if you can get it), the tic price seems like a cheap date. So, let’s talk about the brew line-up. For the local hometown hero’s, these guys bring out the big guns. Goose Island had a whooping 12 entires and all rare, new, and/or unique executions that I’d never have imagined getting to taste at one place/time. Their Madame Rose and Lotita are anxiously awaited releases and I had both at FoBAB. There were local brewpub stand-outs like Revolution and Piece, that are normally only enjoyed at their locations. The best of  local and regional breweries like Two Brother, Three Floyds, Capital, New Holland, and Founders. And, finally special brews from big dogs from around the country like: Lost Abbey/Port, Firestone Walker, Dogfish Head, Harpoon, New Belgium, and Stone. Almost sensory overload in terms of locking targets, but I mean that in the best way possible. 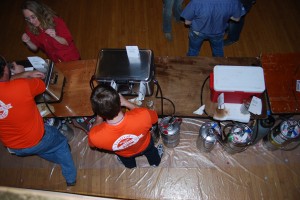 So with that preamble, what did I have and what did I like? My written records indicate (17) brews, which in full disclosure came not from additional tic purchases, but from friendly volunteers that either forgot or were overloaded. If there’s any disappointment from the day, it’s that is my list of brews that I didn’t get to try. But’s that mainly cause they were os many outstanding brews, the proverbila kind in a candy store. Anyway here’s my list in order of consumption:

3)Central Waters – Bourbon Barrel Stout, American-style Stout. Chocolatey, medium mouthfeel, and shows how wide of a range that great BB Stouts can have.

5&6) Two Brothers – Heavier Handed, Imperial IPA aged in French Oak Foudres (big ass oak tanks). Like biting into a orchard fresh cross bred grapefruit/orange malt blast. I think this might have been my fav if pressed to pick one.

8)Flossmoor – Hi-Fi Rye, Ryewine aged in Woodford Reserve barrel. OK, full disclosure is that my Louisville (born&raised) brother-in-law drinks Woodford. Need more word to build case why this is a great brew, but it is.

9)New Holland – Beerhive, Belgian Tripel with honey and ginger aged in BB. Turned me around on Tripels, I very much want to try this again in a more isolated tasting. Maybe number one on trying again, soon.

11)Metropolitan – Lagered Baltic Porter, brewed with a small portion of cherry wood smoked malt. Another full disclosure, is that I’ll always root for this local and small operation. This husband and wife team make only lagers, staying true to the punk rock principle of fierce independance and style. But, this is no charity case, they make great beers and I’d very much like to be able to have this brew on a more frequant basis. 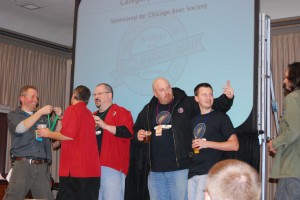 14)Firestone Walker – Lil Opal, Belgian Saison aged f/ 17 months in medium toasted American Oak. Most wine like, and lowest alcohol at 4.1%c ABV at event. Not sure it was right for the FoBAB.

16)Two Brothers – Askew, Ale brewed with cpmplex yeast strains and other stuff. Tart and very clean, but I had a small sampleso I’m can’t make a full report.

17)Harpoon – Leviathan, Imperial IPA aged in Jim Beam barrels. I only had a small taste, but three of my co-consiratores liked this brew very much. They taled about a cool citrus blast in a big Imperial.

The brews I most wished I had tried are from Three Floyds, only because of how great their brews can be. But, I’m disappointed in their sparse showing at FoBAV, and they are members of ICBG, and most of the FFFs crew seemed to be in attendance.

So, I’ll wrap up this summary cause it’s late , and it’s Sunday night. But, more to come on FoBAB cause it deserves the3 coverage and I think the event is way under appreciated for what the convergence of super great brews. And, I know Bourbon barrel aged in widely appreciated, but there’s a case to be made for the midwest rightfull claim to being the epic center of the style. However I’m also reluctant to contribute to a greater awareness of FoBAB as some of the coolest happenings get wreaked by their own success. 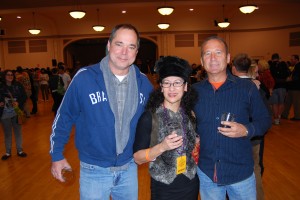 Next up is recap of Top/Gold winners in each of the gten judged categories.