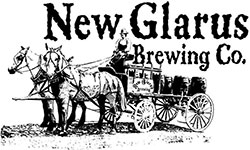 It should come as no surprise when I say that New Glarus Brewing Company is one of my favorite brewers of American craft beer. Since I have been keeping track of my beer reviews on Two Beer Dudes, I have had some 34 flavors (reminds me of the ice cream shop for some reason). Over the past few years they have started flexing their muscle into styles that are “hip” and have done so well.

Black Top is a cascadian dark ale that quickly shows that New Glarus has the ability to brew up a smooth and nicely hopped beer. Black top’s dark malts and dry hop aroma compete for attention on the nose and eventually in the mouth. Hops are west coast in style while there is enough balance to bring a touch of bitterness in the finish but one that is fruity and short.

Another solid offering and one that I look forward to the next. Enjoy!

Useless Fact: The practice of using ten pins in the game of bowling originated in colonial America as a means of circumventing a gaming law. An eighteenth-century ordinance in Connecticut ruled that “bowling at nine pins” was illegal, and offenders were often jailed or placed in stocks. To get around this law, bowlers added an extra pin to the game, so that they would be playing “ten pins” rather than “nine pins.” The name stuck, and so did the number of pins.