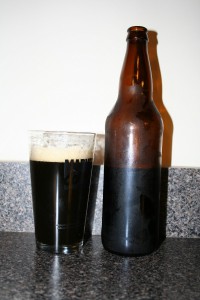 It doesn’t seem like six weeks have passed since I brewed my first batch of Caddy Tan an American brown ale. This is my third tasting of the beer with my first coming only a week after it was brewed. It is much better now.

Look: Deep brown with an inch of creamy, tan foam. Retention is quite good with a somewhat sticky lacing throughout.

Aroma: Orange citrus hits the nose first while roast and chocolate malt along with touches of fruity hops add some complexity. A touch of sweeteness can be found but that could be part of the hops actually.

Drinkability: The light bitterness of the overall beer, as well as the sweet orange and fruity hops, make it quite easy to drink. Medium carbonation with the same mouthfeel, there is a dry mouth feel that sets in.

Overall: Since my original tasting the beer has rounded out nicely. The beer is much more bitter when cold and definitely needs a chance to warm. The aroma is probably the hightlight. The taste seems faint, from the malt end, but the hops add a very juicy finish. In spite of my complaints that I left a lot of aroma in the hop bag on bottling day, I think there is a nice amount of hop aroma.

I would definitely make the beer again. Going to have the TNBC guys give it a taste tonight to get some more feedback. Enjoy!

Useless Fact: Bees have five eyes. There are three small eyes on the top of a bee’s head and two larger ones in front.