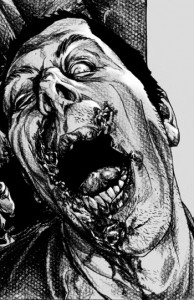 Hype: to create interest in by flamboyant or dramatic methods; promote or publicize showily (Dictionary.com). It happens all the time and in every facet of life. American craft beers receive their own fair share of hype. Some due and some just because. Big beers really seem to attract the most attention with many beers receiving said hype just because they are “big”. Shouldn’t the hype be a because of how good the beer is and not the difficulty to get the beer, the word “imperial”, etc?

Zombie Dust by Three Floyds Brewing Company an American Pale Ale which is brewed and dry hopped with citra hops exclusively. Citra hops, darn tasty. One of my favorite hops that I use a lot in my home brew. So to say this beer didn’t have my interest is an under statement.

Citra hops greets the nose well before you put the ole sniffer above the glass. The taste is citra hops all over again. The best part is the balance and care this beer is brewed with. Minimal bitterness, refreshing, crisp, and easy to drink. Hype well placed and earned. Enjoy!