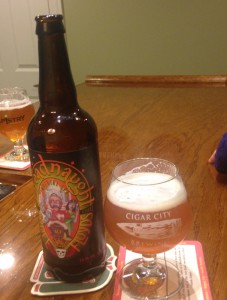 I reviewed Dreadnaught on the site over six ago. I had Dreadnaught as part of the 365 days of American craft beer back in 2011; almost five years ago.

It has easily been 4 years since I have been able to lay my hands on a bottle. In spite of my proximity to the brewery (about an hour), I don’t find my way to the brewery all that often, I can’t find Three Floyds on the local beer shelves, and I can’t stand standing in line for an hour on a weekend just to purchase beer to go from the brewery.

My attitude towards chasing beer is apathetic at best.

Matt, a new addition to Thursday night beer club, has an in with the local beer store. He was kind enough to get a bottle on hold for me. Upon bringing it over, squaring up on the cash, I promptly opened and shared with Matt.

This was a treat to the senses. Better than I remember, possibly due to the long time since I was able to land an example.

This isn’t a review but a testament to how this beer has stood up to the test of time. I have found that some beers that I rated highly at one point, don’t have the staying power to my senses. As time, new ingredients and brewing techniques evolve, so have my senses, especially with hopped up beers. The new, bold hops have conquered my ability to enjoy lightly hopped pale ale and india pale ales. I crave more.

Wish I could lay my hands on this more often but not too much; I want to keep it being a beer that I fondly regard. Enjoy!