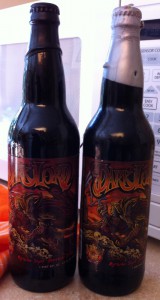 How does Three Floyds Brewing Company Dark Lord and a baby shower come about? Easily when Chuck is the soon to be first time father. He has been planning the shower from the standpoint of beer for a long time (uncanny how differently men and women look at a baby shower).

Prodding from his wife made him brew four beers for the event. I am horrible with names of people let alone beers, so I will briefly describe each:

I knew Chuck had a plan to bring some older Dark Lord bottles to share with the worthy. Glad I am worthy. He opened up a bottle of 2007 and 2008 Dark Lord. His friend Michael and I were responsible for splitting a bomber equally between ten pours of each: the worthy were to get 2 ounces of joy from each bottle. Luckily the plastic cups had a line that I determined to be the 2 ounce marker; amazingly it was.

2007 had a charred flavor that over whelmed, distracting from the experience. I would say it is past its’ prime. 2008 was much smoother, not having really much character compared to the first. It was hard to go back and forth without cleansing the palate. I might also just be that bad of a taster. Both beers still had hints of alcohol while leaving the lip sticky. Not quite cloying but awfully close. I would like to try them both again in a more controlled environment. I imagine that 2009 has to be drinking well at this time.

I did bring chuck a bottle of Bourbon County Bramble Rye as my baby shower gift (Yes, my wife did get real baby shower gifts). Once the baby comes, I have a special treat to open on a Thursday night when Chuck can make it out. Enjoy!

Useless Fact:Starch is used as a binder in the production of paper. It is the use of a starch coating that controls ink penetration when printing. Cheaper papers do not use as much starch, and this is why your elbows get black when you are leaning over your morning paper.