2015 Dark Lord Day was by the worst day weather wise since I have been going to the event (2010 Dark Lord Day). Weather reports called for rain starting on Friday evening with up to an inch of total rain before it stopped late on Saturday afternoon. Besides the rain, the temperature never made it out of the mid-40s, making for a nasty mix of early spring Chicago weather.

Upon arriving at the business park that Three Floyds is situated at the back-end, I was directed to park by festival workers. At five miles per hour, I avoided the sporadic, stammering, non-coherent strides of patrons that were five or more drinks past their limit, I finally arrived at the parking lot, the only one that seemed to be open to the public. $25 lighter, I found a parking sport amazingly close to where Rich and Chuck had been hanging all day. 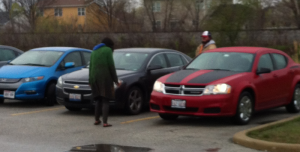 Dirty and drunk isn’t my idea of a fun day at Dark Lord Day.

Shortly after meeting with the boys, Chuck opened a 2014 Dark Lord to share and I was greeted by a man walking (if that had any chance of being walking, I am world class sprinter) a woman to a car. She was covered in mud to her waste, nice and wet; filthy. No way she would be getting my car but the dude through her in the front seat. Dirty and drunk isn’t my my ideal way of spending Dark Lord Day. Fast forward an hour or so: the woman wakes up, opens the car door and the alarm goes off. The guy must of locked the doors as he left. Stupidity. One of the guys in our decided to help out and disconnect the car battery. Silence is bliss. 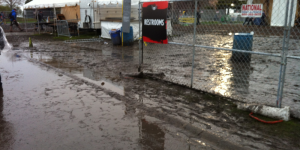 The mud. Did I mention that an inch of rain, mixed with 6,000+ people trampling over grassy areas makes for a perfect cocktail of mud. I didn’t arrive until the late afternoon, when it stopped raining, plenty of time for the dragging of drunken shoe soles to mutilate the grass and wood chipped areas. Many people were wet up to their knees as the jeans they were wearing soaked up the rain. Many were donning mud up to their knees as well, while a few had fallen completely in the mud, similar to my first aforementioned woman above. I believe a few “adults” were looking at being dirty as a badge of coolness. Needless to say I am glad I am not cool.

Dark Lord Day is know for having Dark Lord, some Dark Lord variants, and great guest craft beers on tap. Walking around the tap tents didn’t impress me as much as it has in the past. Prices are up. Way up! More on that shortly. The guest tap list wasn’t as strong as in the past. Zombie Dust was no where to be found. Rich did have a couple pints of a Brew Kettle IPA that was on tap. I don’t remember the name but the aroma and flavor of the hops smacked tropical fruits all over the senses. Damn solid.

As the day wound down towards the E group (6:30 – 8:30pm), Chuck became more inebriated, Rich and I decided to wait out the line, and we all listened to death metal while laughing at the over served. During this time, a guy fell (drunken stumble) while carrying 12 bottles. One of the four packs hit the ground, breaking the bottles. $80 of dark, devilish liquid mixed with the rain soaked asphalt. What a waste.

If you look close enough there is probably a bottle that still has beer in it. I am surprised that Chuck didn’t try to drink it!

Chuck’s pickled liver forced his brain to short circuit. He started going up and down the isles of picnic tables that were stuffed with empties and some not-so-empty bottles of craft beer. Chuck took this an opportunity for free beer. Luckily he tried to pour the first into glass. The chunks that rushed out made me think cigarette butts, not yeast. A bit of coaxing allowed me to pour both out. Trying to be a responsible “advocate” (Chuck’s words), I kindly reminded him that he had to drive home from Rich’s house after the event. He promised to stop drinking as we headed for the bottle line.

Three Floyds is not your friend. They want your money: quickly and efficiently as possible. The cost continues to rise. In six years of going I never had to pay for parking. The price made me think I was in Chicago, not Munster. The cost of each ticket, with fees, is up to $45+. The bottles went up $5 to $20 per bottle. If you factor in the cost of the ticket, the bottles are over $30 each. If you want to throw in the parking costs and the intangible of your time, gas, wear and tear on your car the cost sky rockets. All this for an okay beer at best. Good thing friends are there to talk me off the ledge.

Time spent with friends is much better than Dark Lord will ever be. If I do go in the future it will only be to point and laugh at Chuck! Enjoy!