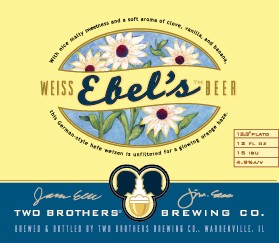 Two Brothers Brewing Company seems to have that name that any and all would call their brewery. Obviously and possibly unfortunately that name is taken for all time. Two Brothers operates just west of Chicago in Warrenville, Illinois.

Up until recently it they have been content to brew American craft beer that they are their loyal followers appreciate. I don’t know if they are falling prey to some of the changes in taste and developments in the industry, but they are starting to produce and should be releasing a sour in the near future. That is good new for me. The fifteen minute car ride will well be worth trip.

One of Two Brothers stand by beers is Ebel’s Weiss. If memory serves me correctly this is the last name of the brewers. Nice play on words. A definite any time beer that is well placed lawn mower beer. Enjoy!

Useless Fact: The highest tide in the world is in the Bay of Fundy, Canada, where there is a rise of 53 feet (16 m).