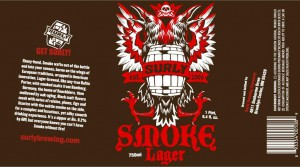 American craft beer was on high alert as we had our monthly get together of TNBC. More on another blog about this (if Shawn get’s me the results) but the theme of the evening was lagers.

An interesting theme actually. When I started thinking about the ratio of ales I have to lagers, there was no comparison. I almost don’t even think about lagers, period. If I do, it is usually in terms of the macro American adjunct lagers. That is not a good topic with me.

Unexpectedly the evening yielded quite a nice group of lagers. Leading the way was Smoke by Surly Brewing Company. Picking this beer as the favorite of the night and as beer number 119 is a small miracle. If you have followed the blog at all you will know that I hate smoke in my beer. A beer named “SMOKE” makes me nervous.

Smoke, though, is nicely smoked in such a way that it doesn’t take over the beer in the aroma or in the mouth. There is enough in both instances to let you know they are there but they are no bothersome or over accented. The smoke in the mouth comes late and gently stays for a few seconds before inviting for another go around. I am actually glad that I have this beer in my cellar but I would definitely have to share the 750ml with friends. Enjoy!