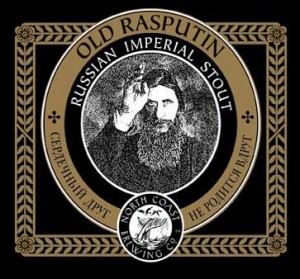 Winter seems to be hanging on a little longer here in the Midwest than any of us would like. After a taste of 50, even 60 degree days, we were back to the 30s with the temperature slowly climbing all week. Supposedly the weekend it going to bring 50s (the normal temperature around here this time of year) but, of course, rain. Maybe that is a sign to the type of season the Cubs will have this year. 😉

These cold, crappy days always draw me towards bigger beers. I just have to remember to not eat so much before said craving. Usually the next big step is deciding which stout or porter will fit the profile for the evening.

For some reason Old Rasputin Imperial Stout by North Coast Brewing Company called my name quite quickly. The bottle I opened was a 2009 bottle that my Mom had given to me as a Christmas present in 2009. Yeah, each year she gives me beer and she is getting better and better at it.

Old Rasputin is everything you look for in a Russian Imperial Stout (RIS). It is big, bold, but not too sweet. Many RIS beers use so much grain that the beer becomes a cloying mess. This one has good balance and, possibly, the one flaw, is a bit too much roasted/burnt malt. Nonetheless a solid beer that should be on your list of beers to have. Enjoy!

Useless Fact: Women blink nearly twice as much as men.