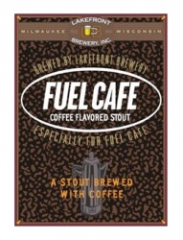 Sometimes an American craft beer on a Sunday is warranted after a weekend of hard work in the yard and/or around the house. Other times, like this Sunday for me, that I was exhausted after a day of home brewing and weekend of in-laws, causing me to be less than ready for a beer.

Unfortunately Fuel Cafe by Lakefront Brewery was the beer chosen for review #117. I sort of felt sorry for it as I knew I wasn’t in the mood.

In spite of that, I found the beer to be on solid ground: nothing earth shattering great about but definitely nothing wrong with the beer either. I would put it in the average category and thought that maybe the coffee should be more pronounced. The bottle I had though was four months old and I don’t know if coffee aroma/flavor starts to fall out as quickly or quicker than hops. Either way I would have it again and liked the creaminess. Enjoy!

Useless Fact: Denver, Colorado lays claim to the invention of the cheeseburger.