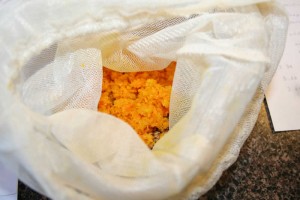 A recent gathering of neighbors and friends depleted my cellar of Grass Cutter a wheat ale that was made for my wife and is supposed to be similar to Oberon. Of course my wife said that I would need to brew more, requesting that this new batch have more citrus than the original. I quickly replied that I understood now why some people do 10 gallon or larger batches of beer. The gods were on my side as she agreed and said that I should brew two batches. Talk about leading a horse to water 😉

Now the request to brew more wasn’t a problem, neither was the request to add some citrus. I figured I would just do some reading of the online forums, searchin for orange additions to a beer and her orange citrus fetish would be addressed. After a lot of reading I decided that zesting an orange late in the boil would be the best way to inject this into the beer. I also had a brew club meeting on Friday, so I inquired on this topic once more. They mentioned using coriander also. About a half ounce of coriander, crushed and added at the same time as the orange zest (about 2 ounces which can be obtained from two large oranges): the last five minutes of the boil.

I am not going to add either of these after primary fermentation is done as I want to find out what characteristics have been added to the beer without imparting additional aromas or flavors. If I don’t think it is enough I can either add more or add in the brite tank the next time I brew the beer.

The beer was already fermenting away this morning but, as I always do, I will leave the beer for four weeks before bottling. I will be brewing another batch of this beer again this coming Sunday. No orange or coriander as there were plenty that liked this beer just the way it was (including myself).